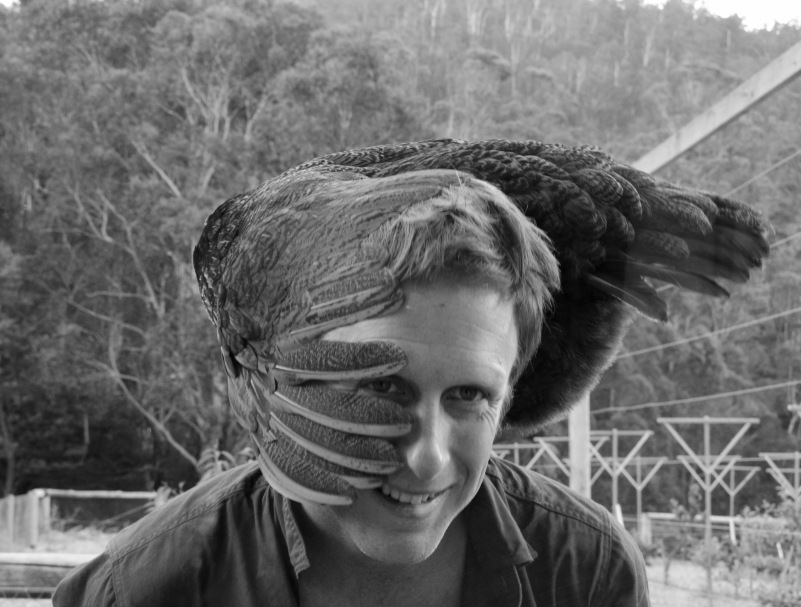 Ben Walter is a writer of lyrical fiction and poetry who has been widely published in Australian journals, including Meanjin, Island, The Lifted Brow and Griffith Review. He has twice been shortlisted in the Tasmanian Premier’s Literary Prizes, and was the recent guest editor of Overland’s special anti-/dis-/un-Australian fiction issue.

What fear was
Where no farmers had ploughed the trees or settled seeds to graze the soil, where the folded arms of scrub bar gullies, where the wide buttongrass plains swelter under peaks of old quartz, there, a boy with his hands and a girl with her feet went out to learn what fear was; their coats on and off, steady offerings calming the drizzle, the evening tiring out and resting as they waded the cool creek, ducked below mosquitoes and planted their tent, pouring torches over the fuel stove that sat bubbling water into dusty grub, the climb, said the girl with her feet, I can’t see it being much of a problem, and the boy with his hands nodded, no way, and the dry lightning sounded in the air as the clouds found few tears; just as we dangle our eyes across the drying grass, useless golden grass, the parched tomatoes and papery corn, this is not the colour of our island but the westerlies have drummed the moisture out, our hollow backyard rivulet with its ferns fading ill and the evergreens flushing autumn, the shells of marsupials chewing edgy stones and the water tank fasting through another hot day when we take to the blank, startled beaches, the salt water infested with bodies, while others hurtle for the high country, the argument of mountains that the boy with his hands and the girl with her feet stared down an hour’s trudge away through the dense heat wallowing in the plains, sweat washing through their shirts and their hair and sunscreen stinging their eyes, step-step buried in the grasping mud, packs pressing thumbs through their shoulders, punching in their tailbones, drink, they said, have a drink, fine, they said, no worries, as they climbed through the roots of the moraine, resting under hung rocks with moist soaks thirsting green, look, the red christmas bells flowering, look, the view across pedder to an orphaned peak, look, as they struggled over the ridge’s relief, as they threw their loads against the grass and floated, look, look, smoke. A great pillar of smoke in the south-west.
– from What fear was, Overland, Autumn 2014

Consistencies
“My writing has a texture, but it is the texture of a material that can be woven in various ways. This is perhaps true of other facets like idea and theme. The specifics of such matters are better observed by others; they will bring their subjectivities to their analyses, and I can say ‘oh, that is very interesting’, and then I can go back to my desk, and my son will run up the hallway and give me a hug. I cannot bring my own self to such an analysis of my writing because I am already within it, and then we are left with one of those mirror sequences that spiral into infinities.

“But okay: rhythm, a certain kind of rhythm pervades my work. Yet I have grown bored with this rhythm and the kind of stories it enforces, so I am modifying aspects of its beat. Other consistencies? Well, what is interesting and captivating to me? What might I become obsessed with fondling in baroque words? What might be fun? The answer: anything.”

Instinct: the only torch at hand
“The way I use words is utterly instinctive. The best patches of writing leap from strange internal rhythms that I do not understand. Granted, editing is paramount. Sentences can always be sharpened, and one can generally find a better vintage of words hiding in the cellar if one is prepared to hunt for long enough. But instinct is the only torch at hand, and the choice of one word over another can only be decided by how the sentence feels.

“I must confess my love for any passing thesaurus. It is allowed to make suggestions, which my instinct may accept or shoot down without mercy… and I recently reversed a copy-edit for a story that appeared in Overland, insisting that ‘onto’ must revert to ‘on to’, because I never use ‘onto’ – I believe it to be ugly and unbalanced.”

Words at their Most Zombie
“Whether you consider words to be alive or not depends on the metaphorical resonance you are hoping to conjure; if you are aiming for connotations about the vitality of language and its power to spark human action and reflection, then certainly, some words are alive; although, many words are just barely. There is the widespread phenomenon of bad writing – if such words are not dead, then they are at least sickly and tucked up in their beds with thermometers poking from their ‘o’s and ‘p’s.

“As a bookseller, these latter letters have a peculiar impact – the idea of a text being O/P, or ‘out of print’ – thus, buried in its absence. And so many words find themselves in an analogous situation: not so much dead as ignored; alienated, perhaps, from their circumstances, a kind of spiritual death. Worst of all are boring words, suburban words that may have a certain health, but not sufficient reflective vigour to be conscious of their commonplace nature. These are words at their most zombie.”

Stranger Things
“For a long time I played with different forms: I might do some reviewing, but I would try to play with the notion of reviewing, so I would go to a concert and review the crowd – I’ve always liked to mess around with expectations.

“I’m a great lover of the potential that exists in all literary forms; this means that at times, I probably spread myself too thin.

“Fiction certainly has been my focus over the last few years. For the most part it’s been short-form fiction; that’s where I’ve had the most success, in publishing stories around the traps. The long-form work has arisen because I love novels, and writing them is what I’ve always wanted to do. I find the novel is such a sprawling beast, hard to contain within your head; I’m sent a little strange when I’m trying to write one.

“I’m suspicious of plot, to a degree – I mean, some novels tend to become too much like a film, and if I wanted to watch a film I’d watch a film. If plot overpowers the work I feel like I know where I’m going, and the beauty of the novel is the mystery of not knowing where you are.

“We’re dominated by a culture of the image, and what we live with in the culture changes our brains. If we’re not making choices to regularly engage with things that will expand our minds, rather than purely enable us to escape, then we will find it increasingly difficult to make those choices.”

Two Roads +
“Am I trapped by words? Trapped where? I speak two languages, one of them badly. I love words and their associations. They are tremendous fun. Perhaps I could be trapped by an enormous hill of ice cream and that would also be very satisfying. Note: I chose ‘ice cream’ over ‘pizza’ in the last sentence because, while ostensibly making the same point, it would do so with different connotations. And this is true of all words!

“The only time I feel disappointed by language is when the exact word does not exist which I am searching for, and sometimes this can be rectified by a neologism, or by adapting a noun into a verb, or similar; at other times, one is left without le mot just (French is not the language that I speak badly).”

un-Australian Stories
“In my use of the conceit, an Australian story reflects our dominant mode – allow me to self-plagiarise:

[It is] fiction that is content to lean back on its banana lounge and stare at the weather. It counts the seagulls, and tells you that it is counting the seagulls, and then the seagulls turn dark. A strong tendency towards minimalistic realism, with wafts of expressionistic description. A flat and predictable voice. Linearity, or the nearest thing to it.

“These are generally very boring and predictable stories. I have written them and they are easy to write and boring to write, and I will never write another one if I can help it. An un-Australian story subverts this formula in whatever manner it sees fit. Personally, I delight in ignoring realism, in the dense and even ridiculous use of language, and in doing what I please. Others will choose different paths, and my wishes warmly follow them.”

Some writers
“I believe Don DeLillo to be remarkable. In Australia, Gerald Murnane and Murray Bail stand out, as well as many of my Tasmanian friends. I adore Simon Armitage’s prose poems in Seeing Stars. But we could go on all day.”

“This is from the twelfth chapter of St. Paul’s letter to the Romans. It is grafted to my mind, and is always nagging me to think clearly and honestly about who I am and what that might mean.

“From Nabokov’s Lolita. For me, this line is emblematic of the delight in words that should characterise good literature.”

Textile Message
“This is the flannel shirt – in Tasmania, we say flannie – I am wearing at the moment, and so it is my favourite. Flannies are slightly warmer than regular shirts, which speaks powerfully to my island’s climate, but they are also the most comfortable thing on earth, the closest thing to loose and fuzzy skin, which is better than it sounds. They also provide allusions to certain undercurrents in Tasmanian – my friend Pete Hay would say Vandiemonian – identity, which I find compelling, even if foolishness abounds within the notion. But where does it not?” 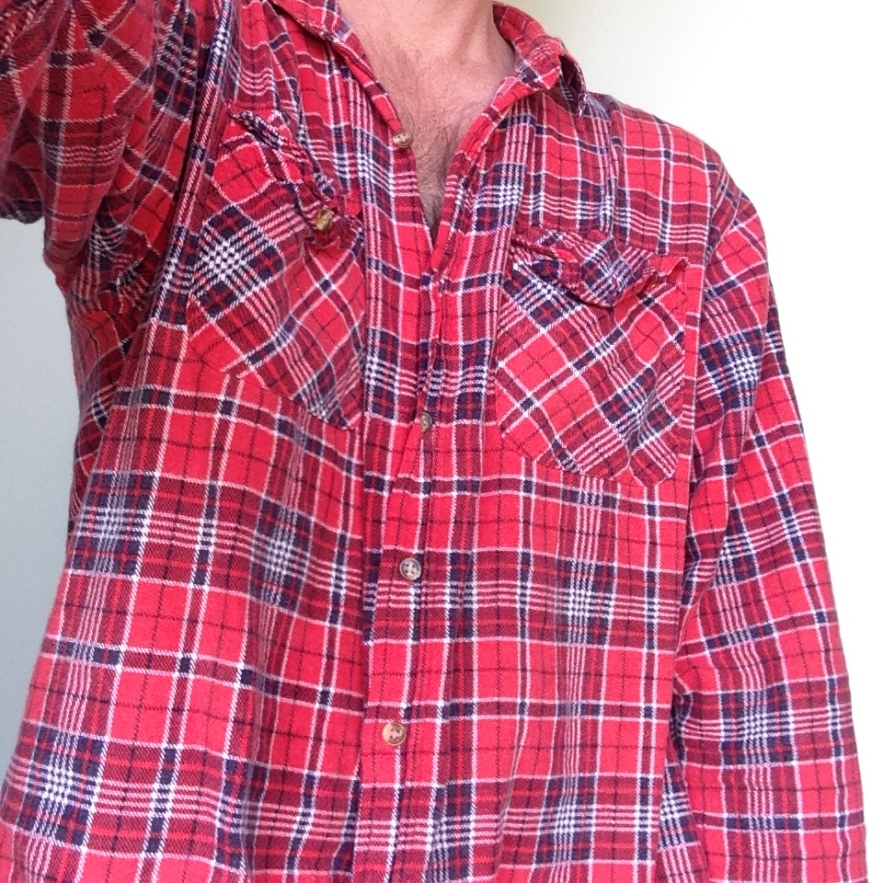